Thanks to my wife for catching my typo on the last one. Remastering comics at 5:30 in the morning probably isn't the best idea... I'm surprised there aren't more errors.... but it's got to be done. When these comics were originally made, my lettering was a weak spot. While I'm taking the time to color them, I thought it best to reset the copy.  Here's the 2nd in the series.

Posted by Unknown at 3:36 AM No comments:

After college I spent my free time drawing comics and trying to figure out just how to get my work out to the public (and make money). The internet wasn't what it is today and I didn't have the resources to self-publish. Syndication seemed like the way to go, so I set to work developing a strip. I had no real concept for a strip or much perspective beyond what I personally found funny. I had no idea what would sell and what people would like. The only comic I'd ever done with confirmed appeal was the one featuring Moon Cheese from college.

It seemed like as good a place as any to start as any, so I began drawing up a syndication proposal. I had no idea what the strip would be about, put very little thought into the characters and was pretty much going to make it up as I went. In the end, it turned out to be about my alter ego: a slacker trying to find his place in the world, his ex-hippie parents (nothing like my parents) who enable him and a few friends. It was met with the inevitable rejection... frankly it's a wonder the proposal turned out as well as it did.

I learned that if you want to succeed, you need passion and the virtue of selfishness. You can't create for someone else and expect it to be good. It has to come from within. The Cheez was created for a nebulous public that I had no concept of and it showed. The work lacked heart and would have been doomed to fail. It did serve to teach me a great deal about the art of comics, so all was not lost. I got some great feedback and constructive criticism from would-be syndicates, instead of the usual form rejection letter.

I took that as a sign my work had potential and it motivated me to keep going. I'm glad I did. Looking back on this strip I can see the bright-spots as well as the failures and I'm proud of The Cheez, despite it's short-comings. It gives me great pleasure to see it digitally remastered now. Hopefully you all will enjoy it as well. I begin with the first panel of that syndication (from 1998 I think) and will post it in it's entirety in the coming weeks.

Posted by Unknown at 2:48 AM No comments:

Well, I'm finally back to the drawing board. Literally and figuratively.  I know I'm long over due for a new post. Life got in the way once again and time has been a problem ... so I decided to remaster some old material in hopes of getting to post more frequently.

This comic is 20 years old (holy crap I'm getting old) and first appeared in The UMBC Retriever. I was a cartoonist in college but my work was considered too edgy and rarely made it to print. The editor hated me and I heard the staff hated her. Anything that made it to print was a small miracle and probably slipped in behind her back. Whether an attempt to get her fired or because other people liked it, I really don't know. It was a frustrating time for me and I resorted to making fun of the other cartoonists. I hoped they would poke fun back, but one quit the the rest ignored me. I plowed on for two years and managed to refine my craft and have some fun ... not how I'd envisioned it would be, but it all worked out pretty well. I was able to experiment, find my style and laid a good foundation for a lifetime of cartooning.

The best creative thing to come out of that time was the character Moon Cheese. This strip was his first appearance in 1992 under my strip's original title "The Essence of Putrescence." Didn't really roll off the tongue but it did some up the crap I was churning out.  Anyway, this was by far my most popular individual strip. When I saw it clipped out and posted on a professor's door, I knew I was on to something. It was the first time outside of my family and friends that I knew somebody else thought I was funny. This was the beginning of taking myself seriously as a cartoonist and the seed for my first attempt at a syndicated strip, called The Cheez.

I'll be digitally remastering The Cheez in the coming weeks. For those unaware, click on the image to get a larger view. Enjoy and thanks, as always, for reading! 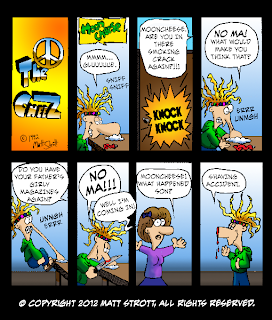