Greetings People of the Internet! Long time no post....

Where the Hell have I been? Good question! I don't know about the rest of you creative types but I sometimes suffer from a lack of focus. I admire you people who can pick one thing and stick with it day after day with laser focus. Alas, I find myself jumping around between half a dozen creative endeavors.  I stick with it exclusively for a bit, then I take a break and do something else for a while. I always rotate back to comics.

Last year was a period of dedicated focus for my comics. It sort of sputtered out when my daughter was born and I've found myself fairly inactive for several months. I appear inactive but as my wife calls it, I've been in "Think Time".  Basically a period of self evaluation, reflection and figuring out what I'd like to do next.

I've been studying illustration and developing my skills mostly. In recent months I got back into comics after being out of collecting for a decade or more.  Before I made my various attempts at comic strip syndication, I had aspirations of making comic books. Never mind the fact that my drawing style doesn't really fit into the comic book mainstream...I attempted it anyway and self published The Caped Sphincter in 1992. It was a super hero parody about a giant ass in a cape....literally.  I still like the concept, some of the writing and, surprisingly, the art has held up over the years.  For the most part though, the writing was crap and the lettering was horrendous! (I'm posting an excerpt image of the villain, The Toxic Crobster, with re-written word balloons for those of you who never saw the book.)

I've been thinking about revisiting The Caped Sphincter but I feel like super hero parodies have been done to death, so I'm not sure I'll rework it or not. Coincidentally April hit at the same time I've been pondering this and I always think of the novel I wrote called Stinkweasel on Rye. I started it in April/May of 1993 and completed it in 1997.  I shopped it around to get published, came close, but no dice.  It's a medieval fantasy of a quirky sort, heavily based in the decades of role-playing games of my youth.  I use to do the bulk of the writing for our group which tended to be more serious but I also use to draw comics about my own characters when I got to play. They tended to be more goof-ball.  Stinkweasel on Rye is a mix of both. This got me thinking I may want to turn Stinkweasel on Rye into a graphic novel or ongoing comic. Not sure yet.

So anyway  that's what I'm working on. We'll see what happens. Anything I come up with will be posted here first! Stay tuned.... and THANKS for checking in! 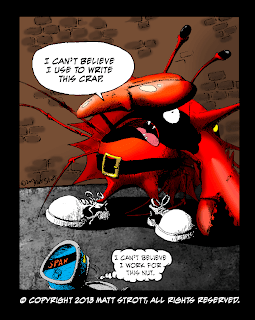