Whelp...a month into plotting the graphic novel and I quickly realize making a graphic novel is going to take a loooooooooooooooooooooooooooooong time. Basically I've been thinking about the plot and how I'd like to re-write the novel to suit the comic format better. I'm planning to turn Stinkweasel On Rye into a multi-character perspective. I had a lot of side characters in the novel whom I came to like just as much as the main character and I think it will be  a better story if I tell their tale as well. So that's what I'm going to do.

I plan to produce the work as I would a comic. Each chapter is going to be a single comic book and when I'm done (100 years from now), the whole thing should be a complete novel. This is the largest project I've ever under taken and it's going to be a challenge.

I have to say I'm a little worried about completing it before I die! Gone are the days when I could hole-up in my office and draw for months on end without any kind of human contact.  Now I have to hold down a job and raise a family. It's hard to write a comic book and hold a baby at the same time. It does give you a lot of time to think though.

This comics was inspired while I was holding my 6 month old daughter Mallory last week. It should be noted that she was not harmed in the making of this comic....enjoy! 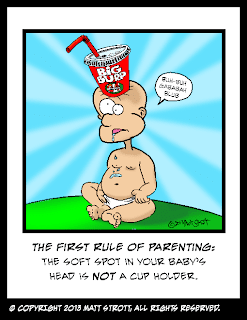