Now that the dust has settled from my 100 days of making comics adventure, it's time to recharge and refocus.I don't want to remain idle much past this weekend. Time slips away very quickly.  I have two of my kid's birthdays this weekend, so I'll be busy with that. With the start of the week I plan to get back into making comics.

Approx. 120 days from now (around the 1st week of October), I'd like to release The Caped Sphincter #2. As I well know, that's a lot of work, and if I don't chip away at it a little every day, it won't get done. I'm not going to be as strict about he 30 minutes per day but I plan to put in the same effort... just spaced out in larger blocks when I can.  In between, I'd like to post panels of The Last Resort and The Cheez comic strip I do, as well as sketches.  I really like the Post-It note format and I'd like to try my hand at some ink and marker sketch cards. They look like a lot of fun and practicing in the traditional way will make me a better digital artist. It should be a nice mix of stuff for people to enjoy here...as long as you like my weird brand of humor and irregular posting schedule that is!

I got these two sketches done this week for Sketch Dailies. This week was superhero/animal mash-up week and the topics were Iron Manatee and The Pugnisher.  Iron Manatee actually made it to sketchdailies.com website.  I was surprised since Kermit the Frogger was the only other one they ever posted. Hope you enjoy them and I'll see you guys soon with more MesyComics! 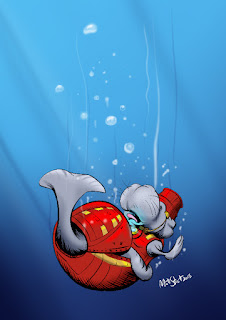 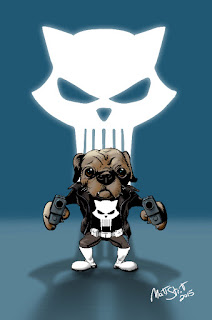 Posted by Unknown at 5:47 AM No comments:

100 Days of Making Comics: Wrap Up Report, Tips and Advice

Last Monday I released the inks of issue one of my comic, The Caped Sphincter and Wednesday was the final day of my 100 Days of making comics journey. I thought it may be useful to provide my account of the experience for anyone considering trying it for themselves. If you don't like these tips, who told you to seek advice from a guy who devoted 100 days to a butt in a cape?

1. If you've been considering making a comic or any other project of yours that's just been sitting, DO IT.  It will never get done if you don't chip away at it.  Working 30 minutes a day is not ideal but setting that simple goal gets "something" done. Soemthing is better than nothing. 100 days from now you'll be 50 hours further than you were before. Like eating an elephant...one bite at a time.

2. Don't beat yourself up when you can't get more than the minimum done. If you're like me, you start when you got an open block of time in the schedule and you're off like gangbusters. You're thinking, "Man, I'll have this comic knocked out in a week." Then life hits you in the face and you're barely getting the minimum in.  It's alright! Just do the minimum and tell yourself "It's 30 minutes closer to my goal."

3. If you want maximum exposure and sales MAKE VIDEOS.  Few people want to read a blog. Making a video gives people the option to listen to you babble on. If you babble on in a blog people will quit coming back. I knew this going in but didn't care to be in front of the camera. I'm not that serious about making this comic a profitable endeavor so I figured I could skip the video.

4. If you're going to blog, do it once a week instead of daily. Again, people will get bored. And use other social media to direct people's attention to it. I use Twitter every time I make a new post and it really helps.

5. Write ahead of time.  I was fortunate enough to have an old script and comic that I was reworking but if I hadn't, I could easily see it consuming a large block of my 100 days. In addition IT'S BORING.  People like visuals...page samples, process video, skits and anecdotes.... I felt a constant pressure to post visuals and it was to my detriment when I had nothing that week. At least in video you could film something else interesting.

6. Don't rush it.  I was working digitally and referencing old material that I had done in 1996. Therefore I tried to skip a lot of the pencils and go straight to ink. While this was fine for characters and things I felt comfortable with, it was impossible for things like perspective and backgrounds. Ultimately I ended up trashing a lot of work, going back and penciling and then inking. It would have saved me a lot of time and frustration if I hadn't tried to cut corners. Thumbnails, roughs and pencils are all necessary steps. Go slow to go fast.

7. Work with whatever media you are most comfortable with.  I chose to learn Manga Studio 5 at the same time I did this 100 days of making comics. In hindsight I wish I'd learned Manga Studio prior to starting.  I don't regret doing this book in Manga Studio, it's just that I've been using Photoshop since version 1 and the learning curve slowed me down considerably. There is still so much I don't know about Manga Studio 5.

8.  All that being said, Manga Studio 5 is well worth learning. I can see myself kissing Photoshop goodbye after I master this software.  The inking and pen controls make me a better inker.  I love the lines I get from it and the stabilization setting really helps me get smooth results I can't get from Photoshop. Best of all I love the ability to ink in vectors. I can worry more about the flow and the gesture than precision. If the line is off I can move an individual line. If I like the position but the thickness needs to be increased or decreased I can adjust it. If I ink too far I can snip off the end with one click! No erasing needed.  The inking alone sold me on Manga Studio 5.

9. If you end up using Manga Studio 5, upgrade to the EX version. I didn't and I missed out on the perspective tools which would have been as amazing as the inking experience (from what I've seen). You also can layout an entire book rather than just a page or spread at a time. (I used InDesign for my layout). I deeply regret not upgrading to EX.

10. Have fun!  This I had in abundance.  THIS IS YOUR PROJECT!  Do whatever the heck you want.  There are no rules. You're the boss and this is your chance to express yourself, so go for it. If you're not having fun, then what's the point?
Posted by Unknown at 6:31 PM No comments:

Well, here we are folks!  The End of my 100 Days of Making comics journey and the end of Issue 1 of The Caped Sphincter!  It's been super fun for me and, judging by the increased traffic to my site, you all have been interested too...hopefully it's because you like what you've seen me post and not to watch me crash and burn. It hasn't always been pretty but I made it!  I got the book covered and inked. I'm pretty proud of the first issue and hope you all get a kick out of it.

I appreciate each and every one of you who has joined me in this. I appreciate the words of encouragement, the shares in social media and the new fans I've picked up along the way.  I especially want to thank Kevin Cross for starting this 100 Days initiative. Please enjoy the link to the PDF below. Despite the price tag, it's free digitally. So, just click on the cover image and it should take you to the PDF. If you like it, please share it with anyone else who may like this book. 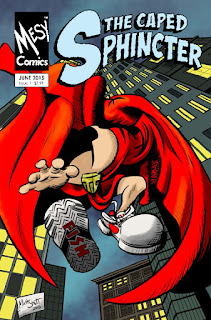 So what now? Is this the END? Hell no. This is just the beginning. This was too much fun.  I plan to continue working on this comic and release 3 more issues by June/July 2016. I'll have a wrap up report this weekend -- to share my thoughts on the 100 Days of Making Comics challenge and then that's it for reports.  When I'm not working my day job or raising a family I'm making comics, so why count days.  I plan to post pages and updates as I deem them news worthy.  In addition to the comic book, I plan to mix back in my usual fare of sketches and The Last Resort panels. I like having a little something for everyone as long as that something is Mesy.

Thanks you all again and hope you stick around!
Posted by Unknown at 8:13 PM No comments:

Do you like big butts and cannot lie? Then no other brother can deny that this comic book may be for you!

Thank you all for joining me on this 100 Days of Making Comics journey. I couldn't have done it without all the encouragement and support along the way. I truly appreciate anyone who's take the time to follow my progress and who is here for the unveiling on my first comic book, The Caped Sphincter.

I'm proud to say I got all 12 pages from concept to inks finished in the first 98 days. I would have liked to have gotten color and cover finished but I can't complain. If you all can please excuse the unfinished cover, I hope you will enjoy the first issue of The Caped Sphincter presented below. I'll call this one the "Sketch Cover Variant".

Please click on the image and it should take you to a PDF of the book. I'll be back Wednesday for my final update and hopefully a finished cover. Thank you for joining me!! And if you think this book is weird or don't get it, that's OK. Most of my family thinks I'm nuts for making this book. 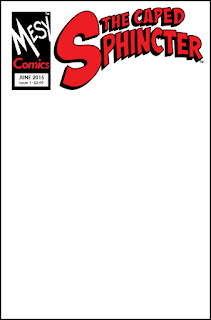 Posted by Unknown at 4:00 AM No comments: